York Left Consortium: Reflections on Capitalism’s Half-Life is a blog that began its life as a space for written interventions relating to the coronavirus and its aftermath by leftist faculty and grad students at York University (as well as some non-York experts invited by York faculty and students).

Its second phase, “Theory and Practice,” is focused on profiling through videos and short written statements what the recent work of thinkers (books or articles for authors, or in the case of activists, recent campaigns) implies for advancing socialism and the struggle against capitalism around the world.

After Isolation: Urban Planning and the COVID-19 Pandemic

By Sean Hertel, RPP, and Dr. Roger Keil A pandemic doesn’t care about social inequalities, but it does follow them,” Jesse Wente said recently on CBC Radio One. This message, we think, could have been the call we planners needed to refocus our thinking …

Death from COVID-19, Collateral Damage, and the U.S. Capitalist-State

The concept of collateral damage is the death and injury to civilians or other damage inflicted as the unintended result of military operations. In this conceptualization, collateral damage, similar to the military euphemism for the killing of civilians, is the idea that there is unintentional, but acceptable death, injury, and damage associated with the carrying out a stated goal. However, unlike the goal of winning a war or when this concept is used in an Orwellian way to describe the “unintended” deaths of non-combatants killed in counterinsurgency operations, designed to kill, injury, and ultimately terrorize a people into submission, the death, injury, and destruction of COVID-19 can be seen as collateral damage because it is unintended, yet deemed acceptable, for the continuation of U.S. capitalism.

Conversion as Strategy: From GM to Workplace Plans

By Sam Gindin On April 24, GM And the Federal government announced that “To help Canada meet the urgent need for face masks for healthcare professionals and for other Canadians, GM Canada is preparing portions of the Oshawa plant to… manufacture approx … 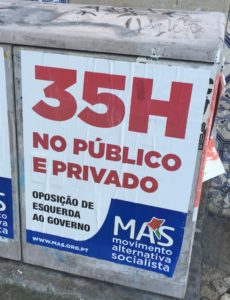 By Robert Latham  A great many established voices on the left have pointed to how the crisis associated with the coronavirus reveals, illuminates, or even intensifies the underlying conditions of exploitation and oppression of workers and the marginali …

The Violence of Non-Violence: Canadian Sanctions Policy in Times of COVID-19

By Claudia Chaufan Both at its birth, and later in the paradigmatic Alma Ata declaration, the WHO established a human right to health which required not only access to health care but the satisfaction of a broad range of human needs, such as appropriat …

By Joel Lexchin Canada’s COVID-19 Emergency Response Act, which provides emergency assistance to cope with the expected dramatic economic downturn due to the COVID-19 pandemic, contains an important clause that may get overlooked. The act effectively b …

“Between the rock of the occupation, and the hammer of coronavirus”: The Coronavirus and the Conditions of Palestinian Workers

By Nithya Nagarajan Palestinian civil society organizations are calling for an immediate international intervention. Though the COVID crisis may be an “exceptional” moment in recent world history, the conditions to which Palestinians are subjected remi …