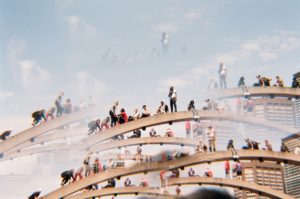 Anxiety has long been an important response to potential threats or hazards in an environment. Indeed, historically, most social formations have involved persistent inequality and poverty that placed people under mental stress. But from sweaty palms and rapid breathing to increased heart rate and muscle tension, the mechanisms that once worked to protect people and assure safety and security — preparing the body for danger by putting it on alert — have become jumbled and misdirected under capitalism, no longer capable of eliciting action or responsiveness.

In the modern context, people are on edge all the time, and whether or not they have sound reasons for it, these feelings are utterly debilitating. Constant financial worries, family conflicts, isolation, self-doubt — when anxiety persists like this in the absence of ‘fight or flight’ conditions, it hyperactivates distress centres throughout the social body. In this regard, the often unclear and conflicting measures enacted by neoliberal market logics in response to the many complications of the COVID-19 pandemic have acted as accelerants, intensifying a myriad of mental health challenges that had never before consolidated into a single global capitalist crisis.

Millions have been infected, hundreds of thousands are among the dead, and the lack of access to proven vaccines and treatments looms indefinitely on the horizon for most. Many previously struggling with anxiety have seen their symptoms worsen dramatically. As of the end of June 2020, Health Canada data revealed that 11 million Canadians are experiencing severe levels of stress, while two million more are at risk for PTSD. An accompanying IPOSOS poll surveying the mental health of Canadians found that 66 per cent of women and 51 per cent of men reported their mental wellbeing has been negatively affected.

Much like the virus, the anxieties COVID-19 engenders act as if they are being transferred from person to person, spreading out like ripples on a pond. Research into this phenomenon — what psychologists term ‘emotional contagion’ — finds that the threat of these sorts of dangers, even if not experienced directly, are enough to trigger shared physiological experiences of anxiety. From this perspective, anxiety manifests not as some sort of closed, private problem, but as what Marxian cultural theorist Raymond Williams describes as a commonly felt and identifiable ‘structure of feeling’, which cuts, unevenly, across different racial, gendered, ageist and ableist lines.

Depending on their material contexts, people are more or less vulnerable to this structuring. This is because capitalism propagates uncertainty, which creates the conditions for anxiety to flourish. Anxiety is different from fear in this regard, which spreads abruptly and is focused on the present. Occurring in situations with a known threat, fear can be located and pinpointed. Rather than aid in avoidance or escape, anxiety serves to obscure possible futures — paralysing people in panic-stricken, apocalyptic scenarios that internalise widespread experiences of alienation.

By individuating responsibility, atomising discourses of ‘self-care’ and ‘wellness’ persuade people if they are feeling sick or lonely, the problem is not social or economic, but personal. This obscures the fact that people have become far less secure in recent years due to dramatic reductions in privacy, workplace rights, job security, regulatory oversight, pay levels, and social welfare, which in turn legitimates further stigma. An important corollary here is that the proliferation of neoliberal social and economic policies directed towards the marginalisation of non-dominant groups by right wing forces have come to a head with the George Floyd-inspired protests around the world.

With the outer tumult of current events rising to meet the inner turmoil of anxiety, insecurities once reserved for the clinically anxious or the socially ostracised have become part of everyone’s routine. As a result, it has become impossible to deny the collective nature of people’s trauma under capitalism. This widespread affirmation that mental ill-health, while nuanced and distinct, is not only personal but collective, showcases how anxiety can be a unifying force for resistance.

The proliferation of anxiety and resultant feelings of alienation contain the seeds for germinating new forms of collective care and support because they provide the clear, shared focus needed for expanding leftist working class, anti-racist and anti-fascist coalitions. The point here is not simply to recount our experiences but to restructure and transform them into a sense of ‘anxious solidarity’ — a double move that necessitates rejecting the mechanisms of governance-via-insecurity by fashioning them into a lightning rod for connecting personal challenges to larger social and economic processes.

A.T. Kingsmith is a PhD candidate in the Department of Politics at York University and co-founder of EiQ Technologies, an emotion-AI start-up based out of the Creative Innovation Studio (CIS) at Ryerson University.